Saturday night, the Zahasky family completed their 2,744-mile trip from Juneau, Alaska to greet a full house at the Rosemary Clausen Center for Performing Arts in Holstein.  Much of the chatter before the show related to the forty-foot bus and vintage camper parked outside. 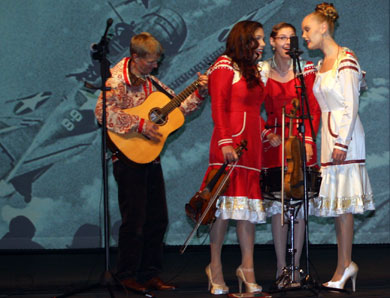 From their name alone, Alaska String Band, we expected to witness a talented family playing stringed instruments but we received so much more. With so many stringed instruments on the stage, most would expect the musical genre to be bluegrass or folk.  This family was able to mix the genres—pop–jazz–bluegrass–celtic–and even swing! Have you ever before heard “In the Mood” performed on the mandolin? A surprise treat, indeed.

The Zahasky family did not disappoint in their instrumental musical talent. They dazzled with the speed with which they played—dueling mandolins with a violin, bass and guitar thrown in for good measure.  Added to the repertoire throughout the evening were banjo, drum, penny whistle (a haunting sound), cheese grater, spoon, toy xylophone, kazoos and even an instrument case.

Another surprise was the history lesson of how the United States acquired Alaska.  There were factoids offered throughout the show which may come in handy someday when playing a fierce game of trivial pursuit. Did you know the state’s capital city is not accessible by road and only by air or water?  So how DID they get that bus and camper out of Juneau? We also had a lesson in the Eskimo regalia worn by Melissa, Emily and Abigail—the kuspuk—a hooded dress. After Melissa gave the history of the kuspuk, she drew attention to their spiked heels—decidedly not Alaskan attire!

One of the highlights of the evening was the mellow trio with Paul on guitar, Melissa on violin and son, Quinn, on bass, playing “I Always will Remember You.” A thoughtful ballad was soloed by Paul with his original piece, “Boy Come Home” providing evidence of his great love for his home, southeast Alaska. I would be remiss if I didn’t mention the backdrop for the evening which was a slide show that is Alaska—the mountains—the snow—the water—the animals—the people. No wonder Paul longs for home. Thank you for leaving it for a short time to share it with us in Holstein, Iowa.