Thomas Wolfe once postulated that you can’t go home again. Perhaps he was right but don’t tell that to those who attended the show at the Clausen Center in Holstein last Saturday evening.

California Dreamin’, comprised of Ashley Rose Smith, Chelsie Odom, Eric Dalton, and Justin Boudrean, traveled miles through blowing and sifting snow on a winter day to bring alive the iconoclastic music and submerged memories of the 60’s. And what a warm welcome their arrival precipitated. 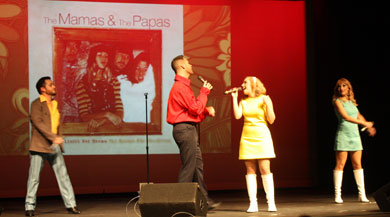 Hearts opened to the quartet’s ultra-professional renderings of songs that helped alter a generation’s concept of what could and what could not be done. We were all going to change the world back then and our combined innocence and exuberance was reflected in such songs as “Go Where You Wanna Go” by The Mamas and The Poppas; “Make Your Own Kind of Music” by Cass Elliot; and “Age of Aquarius” by the 5th Dimension. The Association’s “Cherish” was another one. “Cherish is the word” the four of them sang in their meticulously crafted harmonics and it’s true. We do cherish this music.

It was a real treat to have so many pop classics put back into the spotlight. A person would have to be excused if he or she longed momentarily to dig out those treasured bell bottoms and/or granny glasses from the back of the closet and jump on a plane bound for far off places and untold adventures.

Who knows? Maybe there really is a place where peace and love converge. Maybe the troubadours of fifty or so years ago were right.

Variations on this theme came with what was commonly thought to be the highlight of the night – a medley of Simon and Garfunkle hits. Out of the slick and polished performance which preceded this offering emerged the heartfelt emotion that so defined our nation in the 60’s. Spontaneous applause broke out during “Sounds of Silence” and “Mrs. Robinson”. But it was “Bridge Over Troubled Water” that brought the crowd to their feet in a standing ovation. The words continue to speak to all of us – aging hippies and reseeded flower children alike.

Kudos to “California Dreamin’ for reminding us that we might still be able to make the old dreams come true.