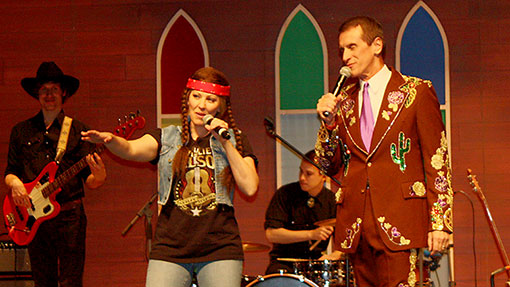 It almost seemed as if the Grand Ole Opry of two generations back had been magically translocated to The Clausen Center in Holstein a week ago Saturday.
The Classic Nashville Road Show, comprised of Jason Petty and Katie Deal along with their unbelievably brilliant back up band, took the stage by storm with the first chord and never let up.

The night both began and ended with a big, bold, and brash rendition of “On The Road Again”.  In between these bookmarks came a heart thumping, twangy, down home cavalcade of the best country music drawn from the early ’40’s to the mid ’70’s.  Songs that delineated the tragedy and/or comedy of life and love as experienced by ordinary people.

They ran the gamut from such crowd favorites as “Wabash Cannonball”, “Will The Circle Be Unbroken?”, and “Honky Tonk Angels” to “King Of The Road” and “Mamas, Don’t Let Your Babies Grow Up To Be Cowboys”.

The whole show was a pure delight but the highlights had to have been the medleys of Hank Williams and Patsy Cline hits.  Rhinestones flashed as they did in earlier days and enhanced the vocals which were near spot on replications of the originals.  Folks in the audience were hard pressed not to sing along with the rollicking hilarity of “Hey, Good Lookin’ ” and “Jambalaya” as well as the accusatory “Your Cheatin’ Heart”.  Ditto for the haunting refrains of Cline’s “I Fall To Pieces”, “Walking After Midnight”, and her opus, “Crazy”.  Some people settled on silently mouthing the words; others murmured them sotto voce under their breath.  However, all heck broke loose after the final notes died  down.  The applause was deafening.

Interspersed throughout the program were bits of history – how the stars got their starts; who discovered whom; and who wrote the lyrics others made famous.  There was also Minnie Pearl’s iconic “Howdyeeeee!” and hilarious specimens of her classic comedy. 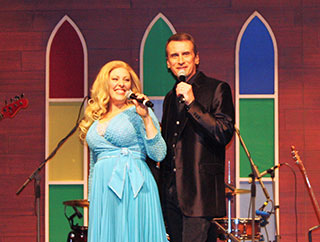 After intermission came duets honouring George Jones and Tammy Wynette (“Golden Ring”) and Porter Wagoner and Dolly Parton (“Last Thing On My Mind”).  Earlier there was June Carter with Johnny Cash’s “Jackson”.  It seemed the playlist went on forever which wasn’t quite long enough for some of those there.  They could have gone on listening, foot tapping, and grinning for a couple of more hours.

It’s been said you can tell a lot about a person by the kind of music he/she enjoys.  The two big thumbs up this show received would seem to indicate that those in attendance were representative of the real denizens of Middle America – those who care deeply about their fellowmen.  They, and the music that moves them, manifest the best of rural culture – the joy of life shared with family and friends.  It underscores their compassion for others’ heart breaks and aches – lived through and triumphed over.  They also understand hopes and dreams – some fulfilled; others delayed for more pressing responsibilities.

It is this empathy that The Classic Nashville Road Show tapped into and which stirred the audience throughout their performance.  We were reminded that life is not hopeless and desolate but rather a thing to be cherished and enjoyed.  It’s true that life can be a struggle but the challenges are what make us stronger then we ever thought we could be.

“To everything there is a season” and we thank this group for bringing that message home in such a wonderful way.